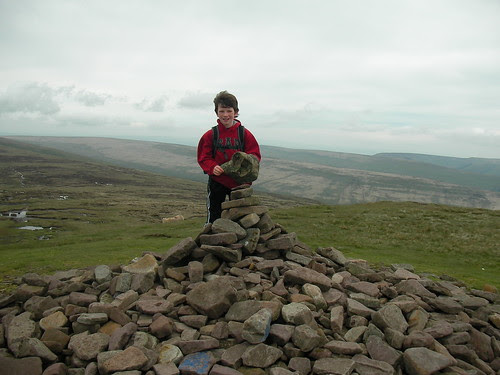 I have always secretly wanted to come up with a new(ish) educational acronym. It's a bit like adding a stone to the top of a mountain cairn (here's Asher doin just that on top of Pen-y-Gadair Fawr, Black Mountains). Whether this is new or not... nah!!! No such thing as an original thought these days. But anyway... Audit Based Learning. First of all, I have to say that I do not like the term audit, something from my sad days trying to learn about accountancy. But In strong contrast, I have been surprised to see how misty-eyed even quite irenic nursing folk get at the mention of the word. I think the potential for this is actually quite good or I wouldnt be bothering to mention it. I mean, why on earth add to the passing fads and theorising that education is regularly slated for...!?! It came up at a meeting where we were discussing the research and informatics content of the curriculum and the need to move to something that would integrate research. We were hatching something like inquiry based learning but noting the difficulty of getting nurses and theory/research to understand each other. It was said that nursing audit is a similar activity to research in many ways, and far less grand, complex and fraught. It is research with a small 'r'. Implementing this would require more than just calling research by another name. And we would have to sit on our hands to ensure that we didnt tie down the students with masses of guidelines and red-tape (as sometimes happens with reflections, so called). It has the potential to engage students in the pursuit of knowledge, framed in terms of their practice areas but within the context of higher education. It could be a new way to promote connections across the theory-practice divide where it matters most, inside the heads of students. Delusion of grandeur moment over (for now).
Posted by Mike Johnson at 3:12 PM 5 comments:

I do not know what happened just then, but I suddenly saw a little fissure in my (relative) complacency about choice of VLE. Ah yes, I know what it was... I was transcribing something a student had said to me in a recent interview.

[I] don't really put anything into blackboard, it's more what I get out, out of it

Well now, I am not about to bash corporate VLE's. Of course, it's the way that we use the tools that matters most. But part of 'networked learning' ought to be the establishment of links, of all shapes and sizes and levels and types of activity.... but it struck me that they ought not to be one-way streets. In the perception of this student, a discussion list was alien to the overall thrust of blackboard. How can the whole enterprise of being a student @university be re-branded and re-engineered so that the statement above can be inverted to read:

[I - or, better, we] really put loads into blackboard, it's more what I put in, into it

Sorry to pull off the cream of this one and not add much commentary but this, her last sentance, especially needs some mulling over:

Although Blackboard designers structure the course platform for efficiency and profit, instructors and students need a course environment optimized for learning and performative teaching.