It was Spring 2006 and, in frustration, at the lack of attendance at IT lab-based sessions, I asked the Undergraduate Student/Staff Panel, 'What then can motivate students to come to IT sessions'?

The immediate answer from some grinning wag was, 'Chocolate!'. Then, when approached by an enterprising librarian, wanting to start semi-formal drop-in information fluency sessions, I joined the two concepts together and came up with, 'The Chocolate Computer Club'.
The tag-lines were sure to flow freely, but I started with:

For those of us who need a reason 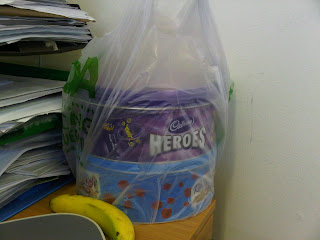 Apart from being very corny, I was quite sure that the concept was half-baked from the kick-off. I mean, who was I kidding that IT could be 'smooth' and/or 'luxurious'?!
By the Autumn of 2007 I had to admit in my appraisal that...

'The Chocolate Computer Club was abandoned after poor attendances'. I was alarmed to hear later on that there had been rumours, spread by staff, that the chocolate would be present in name only. In any case, my choice of chocolate was probably amiss... On reflection, a bar of it may not be something you comfortably share amongst a group of poeple you dont know... I've gone for something more self-contained.
This time of year there are good offers on the tins, so I've been to the shops and got my chocs.
This is not going to be a 'drop-in' session though - it's firmly on the timetable, but students are not obliged to come... there'll be no register (our students have to show they've attended a number of theory hours to keep the bursery flowing).
The session is being run instead of en masse inductions, with a sign-up list in Blackboard for students to claim a place. This is somewhat counter-intuitive because the people who are likely to attend are perhaps less likely to use an electronic tool... However, a reasonable number seem to have managed it so far.
In the event, seven students, wide-eyed and avowedly IT-phobic came along. We had a merry time shaking heads about how aweful computers are and how slow the University systems are, etc. Apart from my brief skit about IT knowledge needing to be founded upon problem-solving, the students asked about their issues with accessing ECDL from home, navigating Blackboard and how to master online submission. We spent a while going through these but actually, of course, the students were as much a help to each other as anything I said.
Promoting connections... with chocolate ;-)
Posted by Mike Johnson at 5:02 PM